This is the traditional land of the Dallambara people, a clan from the Gubbi Gubbi (or Kabi Kabi) language grouping. The land provided stacks of natural resources and these selfsufficient people were able to live their traditional lifestyle in all seasons for many thousands of years before European settlement. Nuts from the bunya pines were particularly sought after and featured in many festivities and ceremonies. During the bunya feasts, up to 600 people from all over south-east Queensland would gather in the area now submerged by Baroon Pocket Dam, near Montville. They made pathways through the forest to define their territorial boundaries, and these were often followed to the bunya celebrations. Today, Gubbi Gubbi people strive to maintain their strong cultural links and pass on their knowledge in an effort to help protect this important area.

Severe logging began in the 1950s, after the construction of the Mount Gerald Trail. Conservationists conducted many studies to ascertain the effects of extensive logging on local fauna. Sadly by 1984, two of three species of endangered fauna being studied at the time, had disappeared from the Conondales. The gastric brooding frog and southern day frog were last seen in 1979.

Gold prices rose in 1987 and there were plans to reopen an old mine on Booloumba Creek as an opencut mine. This was even opposed by the Forestry Department. The mining company planned to expand its operation the next year, making it more financially viable. They intended trucking 100,000 tonnes of unprocessed ore into the Conondales for processing. The state government rejected the plan. The mining company shut down and removed their equipment. They went into receivership in 1990, leaving an area of devastation including holding ponds of extremely noxious sodium cyanide. The government only held a $20,000 rehabilitation bond but eventually allocated $860,000 to repair the damage. The restoration took years and the final stage was completed in April 1997.

CONSERVATION ISSUES ARE NOT NEW TO THE CONONDALES

Since the 1960s, concerned citizens and action groups have lobbied for government action to protect the peaks, ridges, gorges, creeks, forests and endangered animals found in the Conondale Range, known colloquially as ‘The Conondales’.

Passionate bushwalker and scout leader, Ross Scott from Kenilworth, spear-headed the campaign. His local scout group set about compiling a complete list of local ferns and documented around 70 species. Armed with this and other evidence, Scott began ‘educating’ the Kenilworth people about the assets in their backyard and the need to have the forests protected. He worked tirelessly and even door-knocked the locals to gain enough signatures on a petition that he presented to the Queensland premier in 1966 asking for a national park to be gazetted.

Several locals supported the push, and in 1970 the Country Party’s Kenilworth branch submitted a national park proposal to the government. The same year, other prominent figures and organisations submitted their own proposals based on an extensive flora study of the Conondales. These were all shelved by the government.

The Queensland Conservation Movement took the call in 1973. They became the Wildlife Research Group and their extensive fauna surveys helped the cause for a national park.

After the discovery of the unique gastric-brooding frog in 1973, and then the southern day frog in the Booloumba Creek catchments, QPWS officers conducted a fauna survey. They found these two species also inhabited Kilcoy Creek’s catchment. The first papers about them were published in 1974, and the country’s conservationists were suddenly alerted to this exceptional unspoiled area. The Wildlife Research Group was particularly interested and their regular visits revealed the Conondales was home to many animals of scientific interest.

Save the Conondale Range Committee was formed in 1976. They opposed the planting of extensive pine plantations and continued to monitor wildlife in conjunction with the Wildlife Research Group. The next year they submitted their first proposal for a 31,000 hectare area to be set aside as a national park. Two separate areas were declared by the government totalling just 2,126 hectares.

The Forestry Department proposed a road be pushed through some sensitive areas in 1981. The Save the Conondale Range Committee objected but construction began in the wee dawn hours of November 16 and the road builders worked from dawn to dusk to speed up operations. Major Australian conservation groups and opposition parties supported the committee in their request for a three year moratorium so a complete fauna study could be conducted.

With a new name (in 1982) to promote a positive message, the Conondale Range Committee continued to lobby for protection of the ranges. Their slogan became ‘Don’t Log the Frog,’ a cry to save the gastric-brooding frog. BjelkePetersen’s government announced a fauna study but this was to be conducted while logging was continuing! Over the next few years small timber mills closed down, but big businesses bought out the larger mills.

After one of the most consistent, hard-fought campaigns in Queensland’s history, the extended Conondale National Park was officially announced in July 1992. It was enlarged in 1995 and subsequent additions have also increased the park. Around 23,000 hectares of Forest Reserves has also been set aside as part of the South East Queensland Forestry Agreement.

These protected areas are vital for the survival of threatened plants and animals.

Conondale National Park harbours one of Queensland’s most substantial forested areas and is home to an incredible range of plants and animals.

Mountainous ranges of subtropical rainforest and eucalypt forest forms the wilderness area of Conondale Ranges. The forest is almost impenetrable with dense woody vines intertwined through the trees. The park houses five of the tallest peaks in the Sunshine Coast hinterland; Mounts Langley, Ramsden, Lofty, Cabinet and Constance and takes in the upper catchment of east and west branches of Kilcoy Creek and some sections of Ramsden, Peters, Bundaroo and Booloumba creeks. The last three flow into the Mary River, one of the state’s largest river systems that supplies water for a growing population.

The park protects stands of the six major forest types found in the ranges – four types of rainforest; dry sclerophyll (eucalypt) forest, and tall scrubby forest. Bunya pine and cedar are significant. Rainforest surrounding the Mount Gerald Trail section of the Mount Langley walk is representative of forest that covered most of the ranges prior to European settlement. Large areas of diverse forest types have been heavily logged and today hoop pine plantations from state forest days, flank several sides of the park.

The region has many unique fauna species, some found only in the Conondales. More than 180 species of birds, including 22 rare and endangered species, have been recorded. The plumed frogmouth is considered one of the rarest birds in Australia and has been documented at only a few other sites.

Pouched or hip-pocket frogs are found in the park. They were named because their young tadpoles develop in bilateral skin pouches in the adult male’s hips. They belong to the most primitive groups of Australian frogs.

Other rare and vulnerable species recorded include the giant spiny lobster, Queensland lungfish, Stephen’s banded snake and the yellow-bellied glider. 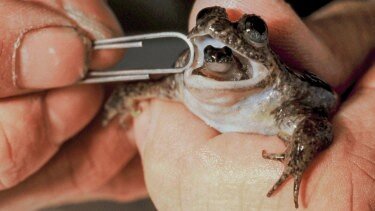 These tiny frogs, about the size of a man’s thumb, were found only in the Conondale and Blackall Ranges. The small area of rainforest, wet sclerophyll and riverine gallery open forests that they inhabited were less than 1400 square kms. They were Australia’s only truly aquatic frog, and the most primitive amphibian, and never strayed far from water.

Also referred to as ‘platypus frogs’ because of their largely aquatic nature, they were the only vertebrates in the world to incubate their young entirely in the female’s gastric system. After external fertilisation the female would swallow the eggs. She had an uncanny method of ‘turning off’ the production of hydrochloric acid, and then not eating when brooding her froglets. Her lungs would deflate and breathing was by gas exchange through the skin as her stomach swelled and largely filled her body cavity. After six weeks, when the tadpoles had developed to froglets, they were regurgitated. This was unique, not only for the frog, but for the whole animal kingdom.

Gastric brooding frogs were last seen in the wild in the Conondales in 1979, and the Blackall Ranges in 1981. The last captive frog died in 1983.

There are several thoughts as to why they became extinct. Habitat loss, degradation and pollution are suspected, but pathogens, parasites, the amphibian chytrid fungus, and over-collecting may have also contributed.

One thought on “Conondale National Park”