Imagine an isolated strip of tropical rainforest about sixty by three kilometres, surrounded by cleared pastures and swathes of dry eucalypt forest. Give it a bit of altitude, let’s say an average of 800 metres, and almost all of its annual rainfall in summer. Now bless it with almost 900 species of plants and a spectacular array of wildlife, including 227 recorded bird species (one of which is endemic), and presto – Eungella National Park!

Approximately 90 kilometres west of Mackay in Central Queensland, Eungella National Park and the associated Clarke Connors Range is home to the endemic Eungella honeyeater (Bolemoreus hindwoodi). It isn’t an especially attractive bird, but its singularity attracts many. So, in September last year, thirty keen birdwatchers from around the country congregated for the second annual Eungella Bird Week (EBW).

EBW is a labour of love by WildMob and Birdlife Mackay, two organisations with a deep respect for wildlife, the environment, and the community. At the welcome dinner in the Eungella Hall, catered by the local resident’s group, we were assigned a head guide from WildMob and experienced volunteers from Birdlife.

Two things were clear from the start: firstly, despite its bird-focussed title, EBW would introduce us to many more aspects of the natural and cultural environment; and secondly, while the organisers were relaxed and negotiable about the program, lateness would not be accommodated.

Walking back to our digs through a refreshing blanket of drizzle-mist, I commented that EBW looked more promising in the flesh than it had on paper and we had been pretty much guaranteed a sighting of the Eungella honeyeater.

By the afternoon of the following day the Eungella honeyeater was in the bag, so to speak. The Mackay birders, a jolly lot who, fortunately, take birding more seriously than they take themselves, led us to one of the many places where remnant rainforest borders farmland. Here, a good number of climbing pandans (Freycinetia excelsa) snaking up the trunks of fig trees and tulipwood, were flowering late in the season. The attractive orange and red bracts cup a stamen of impressive proportions that the Eungella honeyeater find irresistible.

Our hosts alerted us to the Eungella honeyeater’s high-pitched bubbling call and moments later it was out and proud for all to see. At such moments I face a dilemma. Thrilling as a first sighting is, there is another sort of wonderment to be found on the faces of the observers. Greedily, I try to take in both. As lenses focus on the unassuming bird and shutters rapid-fire, I visualise the coffee table book that someone someday will create of portraits of folk enraptured with nature. I predict that many of the book’s subjects will be bird watchers.

In one sense it was ideal to see the Eungella honeyeater early on as we could then relax and take in everything the national park has to offer: platypus, bettongs, frogs, butterflies and much more. By the end of the week we had seen a combined total of 125 bird species, and, encouragingly, the Eungella honeyeater in three different locations. 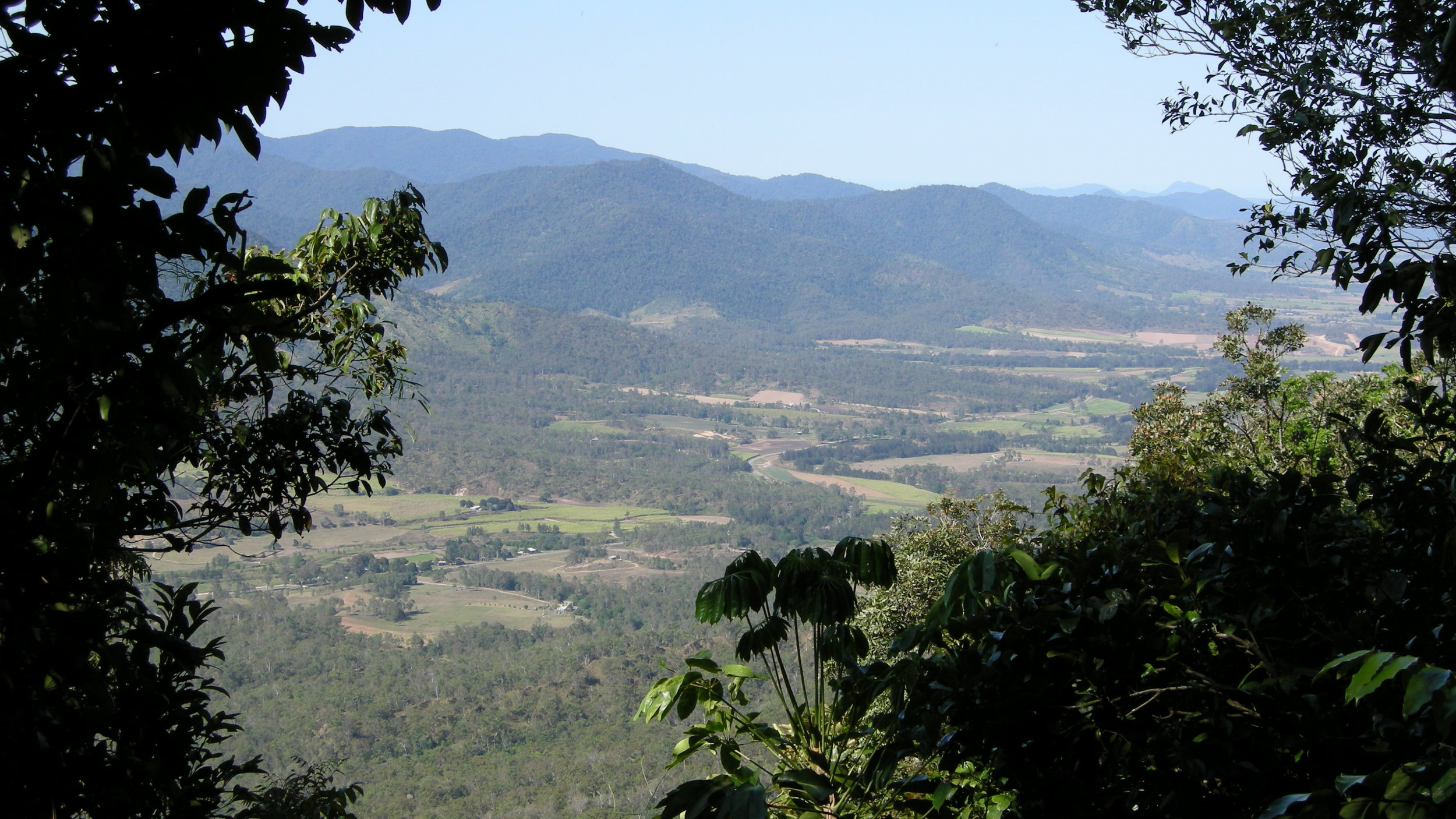 Surveys of the Eungella honeyeater date from 1939. More recently, infrequent counts by QPWS and regular surveys by Birdlife Mackay (1994 to the present) differ in their estimates of the total population but agree on the trend: since 2000 the population has declined by about one third. Drought and land clearing are the identified culprits; in particular, the continued loss of a winter food source from flowering eucalypts, especially the lemon scented gum (Corymbia citriodora).

It’s certainly exciting to see any rare creature, and people travel the world for just such an experience, but it can also be very disturbing. The WWF report, Living Planet, reveals that from 1970 to 2012 the Earth’s population of non-human vertebrates decreased by 58 percent. In the same period human vertebrates doubled.

If CO2 emissions maintain their current trajectory, the Bureau of Meteorology forecasts more severe and prolonged droughts and significantly increased summer temperatures across Australia. Efforts to preserve tracts of rainforest and to forestall the logging of eucalypt forest are laudable, but without a substantive and immediate reduction in greenhouse gas emissions and serious money committed to preserving biodiversity, it’s difficult to imagine the Eungella honeyeater surviving in the wild.

While some species may succumb to extinction without notice I am sure this would not be the case for the Eungella honeyeater. During EBW we were introduced to many residents committed to conservation, including some who campaigned to establish Eungella National Park, others who look after it, and property owners who maintain their land for wildlife. We also learned from citizen scientists passionate about rainforest flora, orchids, owls, platypus and much more.

I tip my lid to all these wonderful people and to WildMob, Bildlife Mackay and QPWS. However, it was the bird art competition by students of Eungella State School that really inspired me. These children, eager to appreciate and preserve their local habitat face global environmental challenges on a scale that humanity has never seen. As they presented their artworks to the assembly of aged adults, I recalled the words of the anthropologist Margaret Mead: never doubt that a small group of thoughtful committed citizens can change the world. Indeed, it is the only thing that has.

Eungella Bird Week was a superb experience and Eungella National Park a treasure. My only regret is that we stayed in accommodation rather than the excellent campgrounds, but there’ll always be next time.