Back to Basics: Biodiversity and Park Management - National Parks Association of Queensland Skip to content

Home » Blog » Back to Basics: Biodiversity and Park Management

The Queensland Parks and Wildlife Service is currently updating Management Plans for the Park estate. This is a large and important task and funding for implementation will likely become an issue.

Although to date a small number of Management Plans have been revised, it is anticipated that two themes will emerge as more plans are completed:

1) Parks provide refuge for our unique plants and animals, quite a number of which are in decline – it’s reasonable to consider national parks as serving a similar purpose as that of Noah’s Ark, and,

2) There are threatening processes at work in each park which require management. See table below. 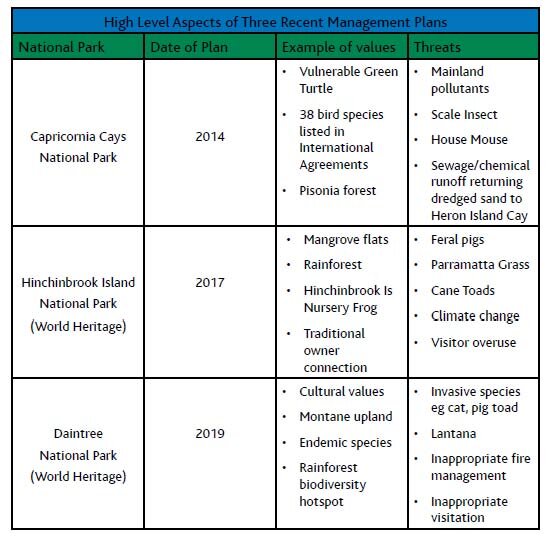 Recently we had the release of the IPBES (Intergovernmental Science-Policy Platform on Biodiversity and Ecosystem Services) summary report. Some 145 representatives from 50 countries, drawing on 15,000 scientific and government sources have presented global findings that are a sobering reminder to us all. Some 75% of land and 66% of the marine environment has been significantly altered by human activities. Another 1 million species are likely to become extinct within decades (the total number of species globally is estimated to be 8 million). The key threatening processes in descending order are: changes in land and sea use, direct exploitation, climate change, pollution and invasive alien species.

An ABC Four Corners episode, broadcast on June 24, provided an Australian perspective, reinforcing that our biodiversity is in decline and that our legislative framework is not effective in responding to this. The examples of trying to ensure the survival of the eastern quoll and Leadbeater’s possum clearly show how prioritisation, funding and long term threat management can determine the fate of a species. The conflict between commercial development and the ongoing maintenance of a RAMSAR wetland at Toondah Harbour in Moreton Bay brings it home to us in Queensland. Nationally there are presently 1,800 species listed as threatened.

None of this is new, although perhaps more urgent in our own state: Queensland’s Nature Conservation Act lists 731 plants and 224 animals as Threatened (Extinct in the Wild, Endangered or Vulnerable).

The word “crisis” is over-used and has to a large degree, lost its meaning, but it does seem appropriate for the state of our biodiversity, yet there is little in the way of proportionate action. Why is this?

We as a community seem to understand the situation yet be unprepared to pay the cost to improve it. A few examples of our interaction with wildlife may help shed some light on this question;

• In a large new housing estate where bushland has been cleared streets are named after native birds, for example; Honeyeater Street or Bellbird Street. It is well established that in such locations it is largely the hardy black and white birds that tend to remain along with the noisy miner and a few introduced species.

• In the cafes below the Sydney Opera House one can enjoy a meal whilst soaking up the view of the harbour and the bridge. At this location an enterprising business is paid to walk a well-trained dog up and down, its sole purpose is to frighten away any adventurous seagull that may land, with an eye to pinching a chip or two. This location has been completely altered from its natural state and one of the few creatures that can withstand this change is controlled.

• On a busy 4 lane freeway surrounded by industrial estate a sign informs drivers of a phone number to call if injured wildlife are observed. People who work with injured wildlife do a wonderful job, and it is well meaning but the overwhelming cost to our wildlife is the initial clearing and vehicles.

• Politicians often defend a development approval, lauding the quality of our legislation and our strict approval processes. This is convenient at the time and certainly adds to the light and heat that is associated with gaining approvals. However, it ignores the reality that limited resources are devoted to confirming agreed approval conditions are being met or that assessments of the conditions are effective. Reliance upon the vexed approach of biodiversity offsets is a good example of this.

Our biodiversity is declining which suggests legislation relevant to species protection is not working. Further it seems that we as a community do not genuinely extend our empathy to our flora and fauna. We have abrogated responsibility.

Longer term thinking, planning and leadership is required to change this. It is heartening that the CSIRO/NAB Australian National Outlook considers choices that are to be made with a focus on industry, urban, energy, land and culture out to 2060. Although it acknowledges that many issues are not addressed in depth, it does raise the need for investing in biodiversity and ecosystem health and linking carbon sequestration planting with conservation goals. We commend the State in establishing a Land Restoration Fund but are concerned about meaningful progress.

IPBES (May 2019), Summary for Policy Makers of the Global Assessment Report.