In August 2018 arachnologist Robert Whyte participated in the inaugural Cooloola Coast BioBlitz, leading a team of naturalists to explore sites on Carlo Road, Searys Creek and Inskip Point, not imagining in his wildest dreams the number of new spider species they would find — and the scale of the world’s reaction to them.

It was August, not usually known as a month buzzing with invertebrate action. Added to that, there hadn’t been any rain over the past five weeks. The terrain was salt-streaked and dusty. On Friday evening, the legendary saviour of K’gari (Fraser Island), John Sinclair met us at the Community Hall, the HQ for the event. He was looking forward to my spider talk after dinner, he said. It was good to see him again, I hadn’t seen him since the 1970s, and I had heard he was ill. If so, he didn’t show it; he was in fine form.

The Fraser Island Defenders Organisation and Cooloola Coastcare had successfully planned the Cooloola BioBlitz to run from Friday 24 to Sunday 26 August 2018. Ninety-seven people had signed on to identify and track down as many living plants, animals and natural resources as possible across seven target areas, representing distinctive habitat types easily accessible from Rainbow Beach, the centre of operations. 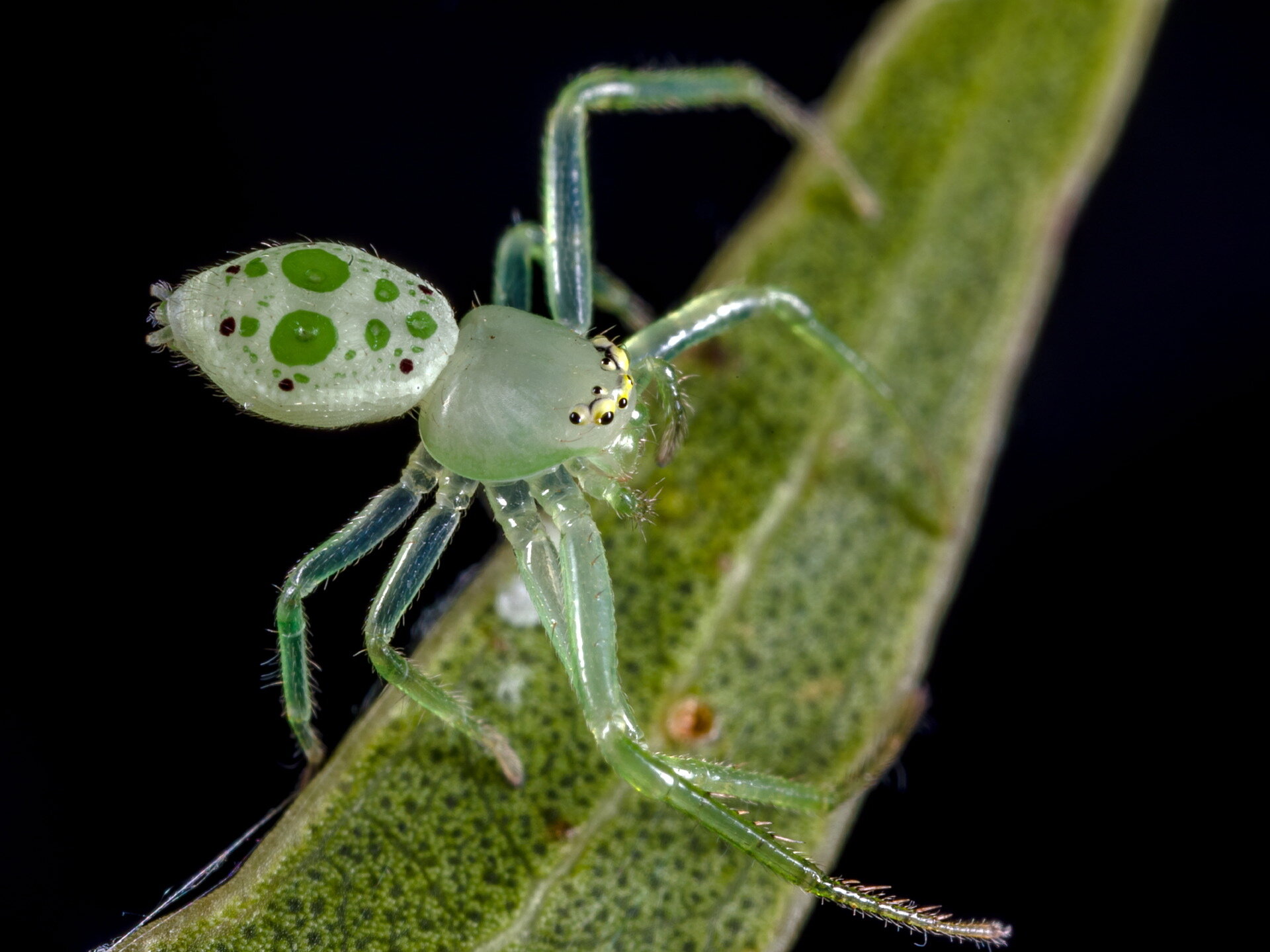 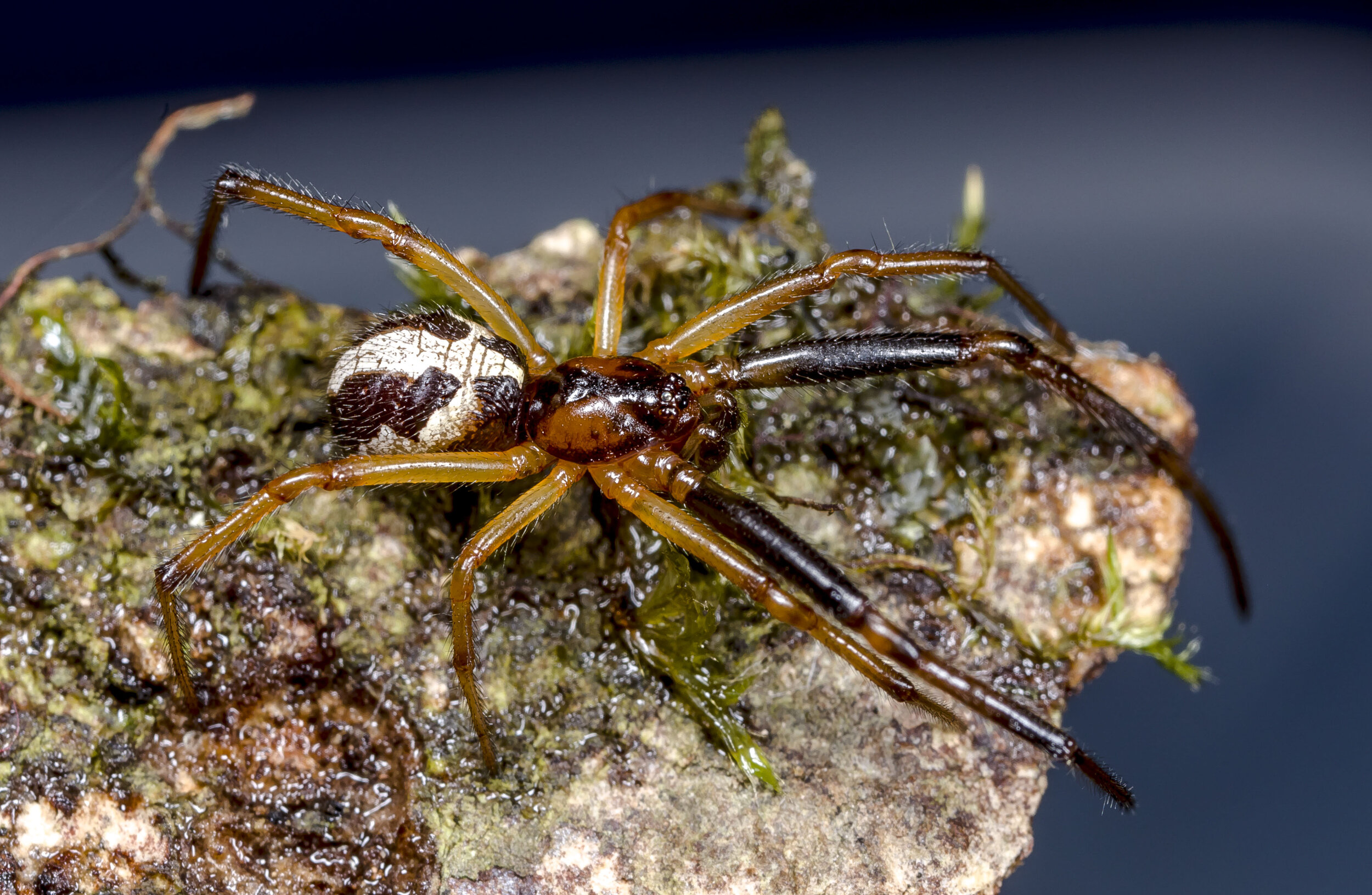 I knew whatever we found over the following two nights and two days would be scientifically valuable. Spiders represent an important component in terrestrial food webs; they are an indicator of insect diversity and abundance and they themselves become prey to each other, frogs, reptiles, birds and small mammals. Many lineages of spiders have evolved to utilise the terrestrial habitat niches where their food is found, some in quite specialist ways.

We intended to use only a few of many possible sampling methods over the search period, including:

• careful visual study of bush, leaves, bark and ground, to see movement, spiders suspended on silk, or spiders on any surface

• shaking foliage, causing spiders to fall onto a white tray or cloth

• transferring leaf litter into bags, then sifting through a handful at a time

The first new species was spotted on Friday night when Ben Revell trekked out to Lake Poona, where he found a new species of Ornodolomedes. He is so adept at finding these spiders, one of them, Ornodolomedes benrevelli was named in his honour.

Our initial findings at Carlo Point on Saturday morning suggested we were encountering far greater diversity than I had expected. I had imagined the combination of 500,000 year-old soils with low nutrient levels and the preceding dry weather would mean low diversity. The opposite was true, suggesting that the relative stability of the landscape over long periods of time has resulted in adaptations to suit a huge variety of micro-niches.

In total we collected over 700 spider specimens over the weekend. After releasing on-site the well-known duplicates and juveniles we had about 165 adults remaining to be investigated. Of these, 37 species were new.

We also achieved the world’s first image of a live specimen of Cetratus circumlitus (L. Koch, 1876); a range extension for a species previously known only from NSW.

We also found a stunning new species of Desognaphosa in family Trochanteriidae, better known for its extremely flat spiders which live in rock crevices and other narrow places.

Searys Creek, a beautiful spring-fed stream with a sandy bottom and clear water, harboured a new Opisthoncus – related to Opisthoncus sexmaculatus and many new cobweb spiders in the family Theridiidae.

Inskip Point, with significant areas of rich wet sclerophyll littoral forest, did not disappoint. The Inskip Peninsula represents an area of great potential significance as far as spiders are concerned and is well worth continuing to investigate with close scrutiny.

Some of the most interesting material gathered in a BioBlitz, or any biodiversity survey, comes from participants whose interests and collecting methods, often at night, leads them into peculiar places.

People who from outside the spider team brought us specimens included botanists, entomologists and fungi specialists. Even Rainbow Beach residents got into the spirit of things, bringing specimens from their backyards. It all counts in a fauna, flora and fungi stock-take of an area.

Some of the new species not mentioned above included an Eilica sp (Ant Hunter), two Money Spiders, four Fishing Spiders, seven Jumping Spiders, 14 Cobweb Spiders (Theridiidae), two Crab spiders, a Trachelid and a Trochanteriid. Perhaps the most exciting of all, we found and photographed both a male and a female of a Baalzebub sp. in Theridiosomatidae, an incredibly rare spider.

All together we found 37 new species in about 5-8 hours of collecting. This was amazing. The story was first broken by the ABC Wide Bay journalist Johanna Marie, but it soon went viral across the ABC nation-wide and then to commercial radio, newspapers and magazines across Australia, the UK and America. My phone just about rang its way through my pocket. John Sinclair was interviewed and made a persuasive case for the upgrading of Cooloola Coast to the same environmental Status as K’gari (Fraser Island). 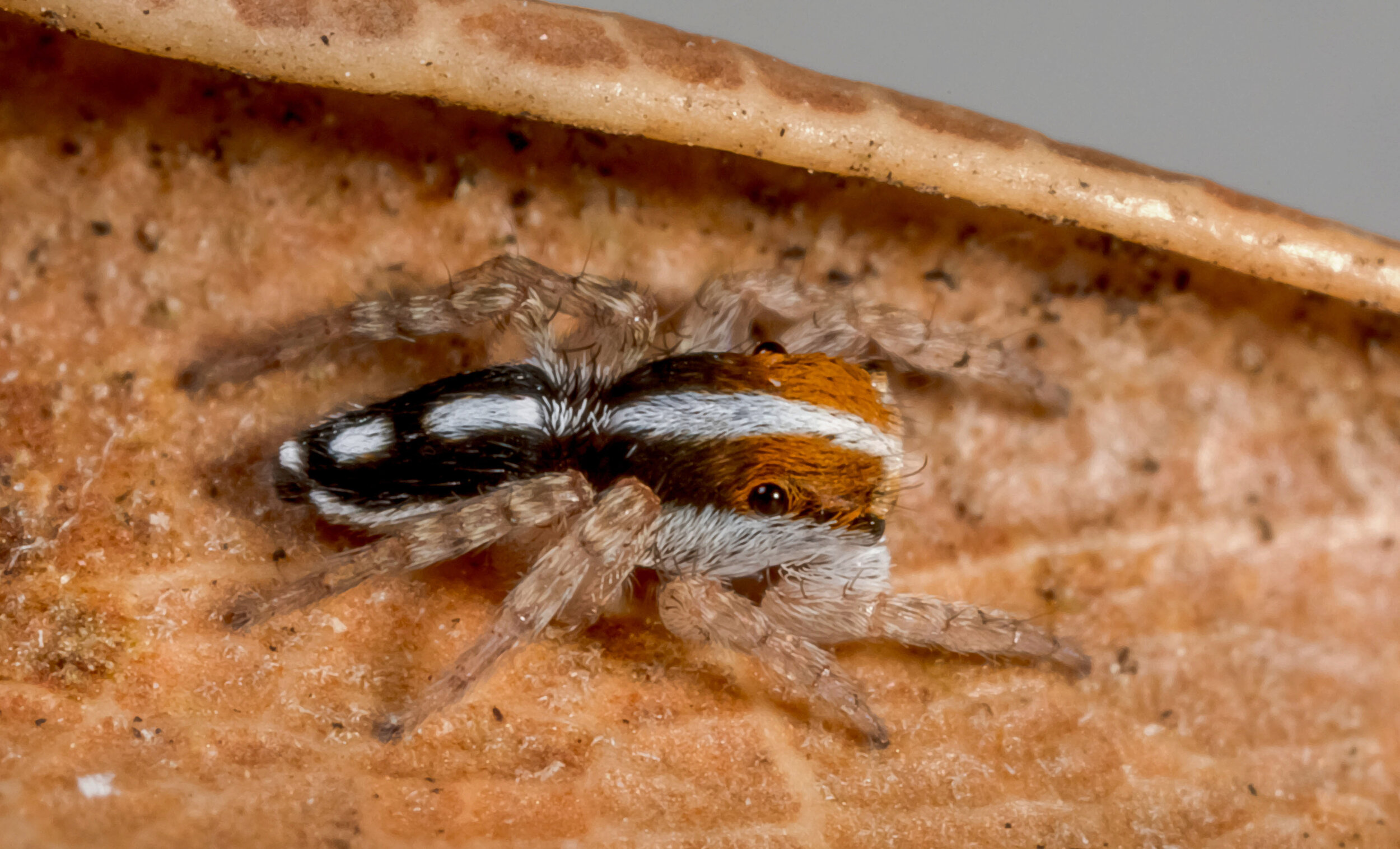 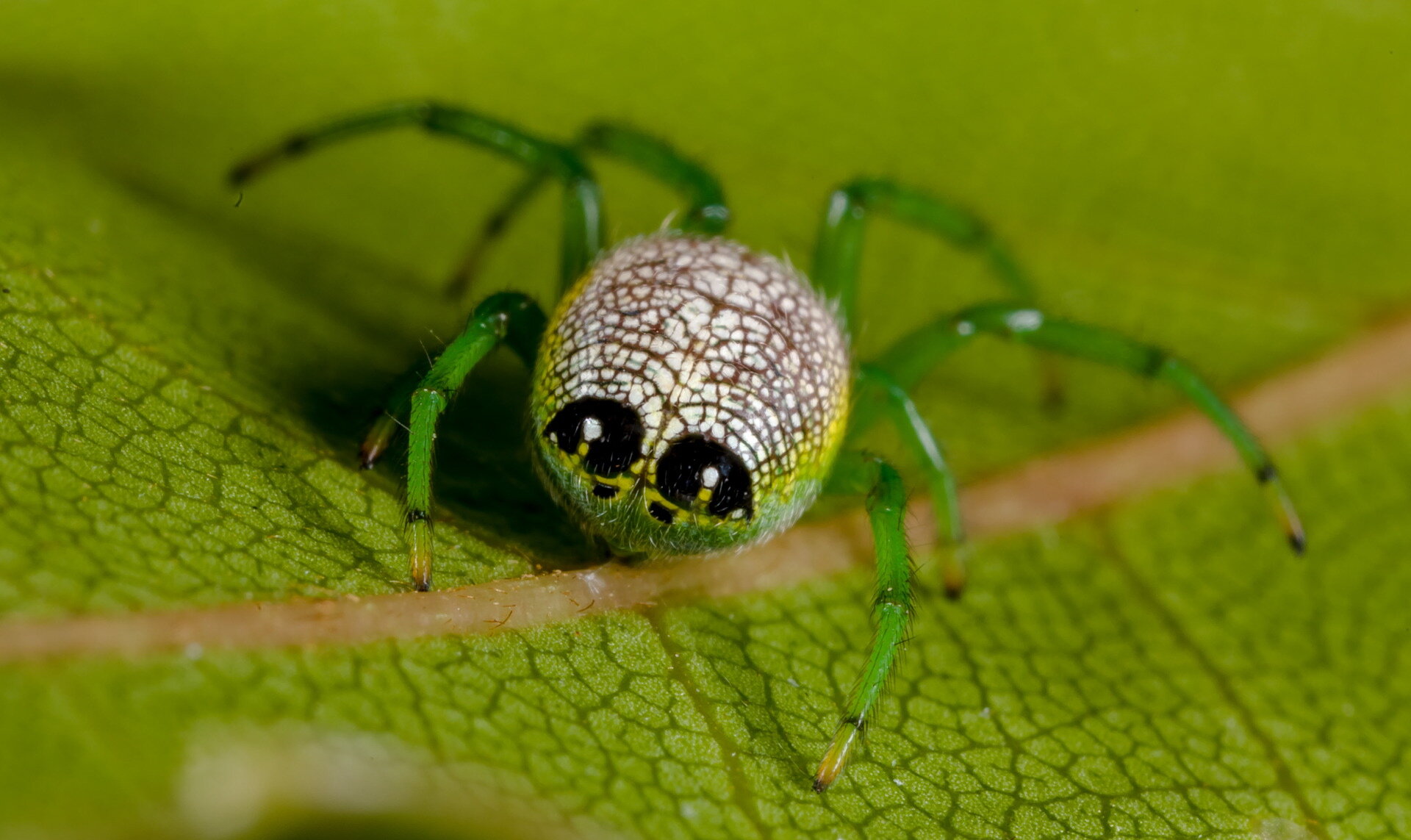 Had the spider team already discovered all the new species on the Cooloola Coast? Hardly! The return visit in May 2019 Cooloola BioBlitz, resulted in 41 more new spider species.

I hardly imagined we could gather more new spider species over a weekend, when we had already spent a previous weekend with such success. Our choice of sampling sites, Bymien’s subtropical littoral rainforest and The Fens, a freshwater lake surrounded by sandy wallum, played a big part in the incredibly small overlap of new species. These ecosystems were so special they supported completely different spider fauna. This once again demonstrated the importance of the region. Our survey of both sites was by no means exhaustive, and many more new species are surely yet to be discovered there. One is saddened by the fact that funding for taxonomy is so meagre in Australia, it may take years for these new species to be described, if ever.

Some of the new species found were unsurprising, since they have been appearing in recent surveys in the encompassing area of south east Queensland, but many were a suprise. Of these exciting of these new species was a Dolichgnatha sp., the first Australian photo of a live specimen of the “true” Dolichognatha with four humps. The Steatoda Whiteslash was known to us, depicted in A Field Guide to Spiders of Australia (Whyte & Anderson 2017), but was notable for the large number of specimens observed at the Fens, one in almost every grass clump. Similarly the Mysmenid and the Orchestina sp. have been reported before but not yet described. Barraina and Tara Jumpers were easy to spot as papers describing these are being prepared by us, similarly with the Hadrotarsine and the two Tharrhalea. The missing female for the already described Helpis foelixi was a great find.

John Sinclair died after the first Cooloola BioBlitz and before the second one. He was deeply missed for his enthusiasm and knowledge. He left behind many fond, enlightening, and often life-changing memories for all of us who knew him.